Naismith's favorite class is civil procedure. "I enjoy the intricacies of the rules 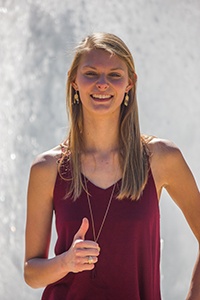 behind how cases are handled. They're like puzzles that you get to piece together," says Naismith.

Saurabh Vishnubhakat is her favorite professor.  "I appreciate his teaching style.  He is very thorough, and I feel like I learned something important after every class," says Naismith. "I also think his bow tie collection is fantastic."

Naismith likes that Texas A&M School of Law is made up of people full of ambition. "I'm constantly impressed by how quickly we've been able to jump in rankings, even with how young the school is," says Naismith.

A fun fact about Naismith is that her great-great grandfather, Dr. James Naismith, was the inventor of basketball.

Aggie of the Week

Every week, during the academic year, the marketing department highlights a law student.  We hope this small task creates a community so others law faculty, staff and students have an opportunity to get to know current law students.