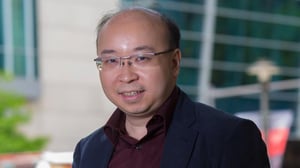 At its November 12 meeting, the Board of Regents of the Texas A&M University System designated Professor Peter Yu a Regents Professor. This designation is the most prestigious award from the System to highlight exemplary faculty. Professor Yu directs the Center for Law and Intellectual Property and holds a joint appointment at the School of Law and the Department of Communication at Texas A&M University. He became the first professor from the School of Law to receive this systemwide honor.

Established in 1996, the Regents Professor award is the highest honor that the Texas A&M University System bestows on a faculty member. Recognizing exemplary performance in teaching, research and service, this award honors "achievements that had an impact on not only their institution or agency, but also the community, the state of Texas and/or at the national and international levels."

The Texas A&M University System is one of the largest systems of higher education in the nation. With a budget of $6.3 billion and over 150,000 students, this statewide network consists of 11 universities, a comprehensive health science center, eight state agencies and the RELLIS Campus. Every year, Texas A&M University may submit two nominations for the Regents Professor award. Selections are made through a two-step competitive process, with equal weights given to the nominee's performance in teaching, research and service. Award recipients are expected to function as role models within the Texas A&M University System and to devote appropriate service to systemwide activities.

"These individuals exemplify the commitment to excellence in research and service that sets A&M System employees apart," said Elaine Mendoza, Chairman of the Texas A&M University System Board of Regents. "I hope their example will inspire others in their own endeavors."

Professor Yu is an award-winning teacher, a prolific scholar and a world-renowned expert on international intellectual property and communications law. He also writes and lectures extensively on international trade, international and comparative law and the transition of the legal systems in China and Hong Kong.

He is vice president and co-director of the Studies of the American Branch of the International Law Association and has served as the general editor of The WIPO Journal published by the World Intellectual Property Organization. His lectures and presentations have spanned over 30 countries on six continents, and he is a frequent commentator in the national and international media. His publications have appeared in Chinese and English and have been translated into Arabic, French, Japanese, Spanish and other languages. He is an elected member of the American Law Institute.

At the School of Law, Professor Yu has chaired the Tenure Committee, the Promotion and Tenure Advisory Committee and the Faculty Development Committee. He also founded the Texas A&M University School of Law Legal Studies Research Paper Series, hosted by the Social Science Research Network, and was instrumental in establishing the Junior Faculty Mentorship Program.

Within the University, he sat on the Technology Translation Advisory Committee, served on the Arts & Humanities Faculty Fellowship Proposal Review Board and reviews submissions annually for Explorations: The Texas A&M Undergraduate Journal. As the director of one of the university centers approved by the Board of Regents of the Texas A&M University System, he actively fosters partnerships between the School of Law and other colleges and schools.

"Hard to imagine a better statement of Professor Yu's contributions and character than the introduction to a letter supporting his nomination to a distinguished society: Describing his productivity, the author wrote that 'if academics were a race, Professor Yu would be lapping us all without breaking a sweat.'  Equally, though, the letter praises him as a 'paragon of kindness and colleagueship.  He is never too busy or too important to ignore a colleague across the country.'

"Beyond his extraordinary level of scholarly production, I am perhaps most struck by Professor Yu's dogged focus on bringing diverse scholars—within the school of Law, across the length and breadth of Texas A&M's colleges and schools, and from around the nation and the globe—into dialogue with one another.  His conferences, roundtables and seminars have come to enjoy a national and international reputation as premier venues for innovative and interdisciplinary thought and analysis.

"Professor Yu is an inspiration. He is internationally known for his commitment to advancing knowledge through his scholarship and to building one of the nation's leading centers for intellectual exchange in the field of intellectual property law. Perhaps less clear from the outside, though, is Professor Yu's equally robust commitment to developing, in his characteristically positive way, our junior faculty colleagues as engaged scholars and contributors. He is a most worthy choice for this most esteemed designation."