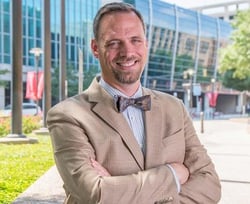 Larson collaborated with a second-year student in 2019 to create a continuing legal education session for lawyers titled, What’s Your Pronoun? In addition, he explains the challenge of pronouns in his blog. where he asks readers to advance a climate of respect for others by taking care with pronouns--"identifying preferred pronouns in signature blocks and creating mechanisms--such as blank spots on hiring forms--for others to do the same."

“We can talk together, perhaps using new and unfamiliar language--both correctly and incorrectly--with an assumption that, when in doubt, we presume the speaker has good and respectful intentions," says Larson.