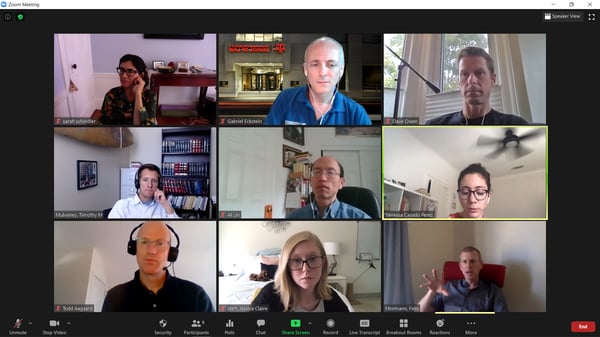 Texas A&M School of Law Energy, Environmental, & Natural Resources Systems Law Program hosted its second annual “EnviroSchmooze” on August 27 and 28, 2020. The event was held virtually this year as a result of the pandemic. However, the small and intimate atmosphere allowed participants to meaningfully engage with one another and receive purposeful and tailored feedback for their works-in-progress.

Each participant received draft papers from the five presenters prior to the event in order to fully engage at the EnviroSchmooze. During the workshop, authors had an hour to discuss their work beginning with a 10-minute overview that identified specific areas where authors felt they needed feedback, after which the floor was open for questions, suggestions, and comments by the participants. The group then dove into each paper’s substance, teased out problems and identified areas that called for further clarification or additional research.

Todd Aagaard kicked off the workshop with his nearly completed book, Electricity Capacity Markets, co-authored by economist Andrew N. Kleit. In his presentation, Aagaard focused on the book’s introductory chapter, as well as the chapter on capacity market demand, and sought advice on how to make the book equally accessible to experts and laypersons. Participants offered various suggestions for illuminating concepts and terms, and for laying a broader foundation for the book.

In sharing her paper describing the second-class status of many tenants, Sarah Schindler framed her article by emphasizing a progressive view of the effect that law has on social conditions and the physical environment. Much of the discussion focused on Schindler’s analysis of how tenants are treated outside the landlord-tenant relationship, including in comparison to homeowners, in eminent domain proceedings, and following natural disasters. Schindler argued that property law doctrines should be re‐conceptualized so that tenants and homeowners have equal, or at least proportional, status under the law.

For the last presentation of the day, Albert Lin showcased his manuscript asserting that, rather than tackling root causes, society often relies on so-called “easy solutions” for environmental problems that eventually prove to be ineffective or even harmful. Lin’s paper described how such solutions can be politically and economically attractive, why they often get adopted, and how they persist. Much of the discussion during Lin’s hour focused on interpreting concepts and terms as a means for framing the paper and its thesis.

In addition to providing the authors with substantive feedback, participants also discussed the value of these informal workshops and in providing colleagues with feedback and suggestions in a safe, collegial, and informal environment. The small and casual setting gave the participants a unique platform to discuss their yet unpublished work, and to seek advice and ideas on how to improve their drafts. Participants also shared their experience with research and how they approached similar situations.

As a break in the agenda, participants also engaged in small group breakout sessions for informal conversations. The atmosphere was gregarious and fun, highlighting the personal collegiality of the group and the workshop. Aagard commented, “the size of the group was perfect! The feedback has been high quality-tailored, and very constructive. And while the online format may be a bit less personal, it actually increased the connectivity since attendees did not have to travel.”

Day two of the EnviroSchmooze began with Texas A&M’s Felix Mormann presenting on climate choice architecture and the public’s willingness to sacrifice return on investment for climate benefit. In his article, Mormann made the conceptual and empirical case for harnessing choice architecture as a catalyst for more climate-friendly investor behavior. Mormann focused his feedback request on how to combine the climate, architectural, and capital markets components in a coherent structure.

Mormann was followed by Dave Owen whose draft paper offered an empirical assessment of regulatory takings claims at the federal level. In the paper, Owen discussed the perceived prevalence versus the actual dearth of Penn Central-type claims in comparison to categorical takings claims. He also highlighted results of his study showing that that non-Penn Central claims are more variegated and doctrinally complex, and do not follow the commonly accepted notion that physical and per se takings fall into small, discrete categories that are “easily identified.”

At the conclusion of the EnviroSchmooze, Aagaard said, “I had a great time. It was fun, and all my feedback was very constructive. I look forward to getting back to work and addressing the areas we discussed during my presentation.” Lin added that, “the format was great. You all did a wonderful job organizing the workshop. The intimate setting was very inviting.” Aagaard concluded by saying, “After hearing about last year's event, I was really hoping to be invited this year. I hope I get to come back!”