Judge Matthew Wright ’08 got the idea to create a law school quilt when he realized that no one wanted to purchase his lucky shorts and shirt.

He had tried selling them during the Rosebud 100+ City Garage Sale — a local market where one can find everything from fried chicken to live chickens, and from unidentifiable junk to valuable antiques. Even at $0.25 per piece, no one wanted his ten-year old oversized shorts and shirt.

As Wright prepared to donate his unsold things, he just couldn’t let go of the outfit. It had been with him during the best — and worst — of times. His affinity for this particular ensemble started through the power of laziness. Comfortable and easy to clean, he could grab them directly out of the dryer bypassing the hanger and folding.

He had decided to go to law school after serving as a jury foreperson in a felony jury trial in Waco. According to Wright, “The lawyers were so horrible that I became inspired.” As soon as the jury delivered a not guilty verdict — not because of anything the lawyers did or said — he purchased an LSAT prep course and registered for the exam.

When time came to take the exam, he grabbed the most comfortable shorts and shirt he could find. Passing the LSAT with flying colors, he logically decided that the shorts and shirt were the key factors. When Wright got to law school, prep for his first round of exams included the selection of that same outfit.

Based on his relative success (missing Law Review by only 0.0097 GPA points), Wright decided to stick with the outfit for every law school exam. It even went with him to his mini-semester abroad in Israel. When it came time for the MPRE, it would be needed to ensure success. He placed in the top five percent.

Then came the final exam, Spurlock’s Family Law. There was going to be no “toughest luckiest” because his outfit had survived Alton, Rambo, Legal Writing, McGrath, George, and Kinkade. Once more the ensemble overcame his intellectual and study deficiencies. Wright placed eighth in his graduating class.

His mother would not allow him to wear the combo under his graduation robes. But he didn’t mind because they needed to rest for the battle ahead with Bar prep. Wright wore the outfit at least weekly during Bar prep so they could soak up as much knowledge as possible. He wore it all three days during the exam. He passed.

In the years since law school, Wright lost 255 lbs. and his lucky legal shorts and shirt no longer fit. He ceremoniously folded and placed them in a protected box until offering them at the Rosebud garage sale. Somewhat relieved they didn’t sell, he hatched an idea of how to honor his outfit properly.

During transition of the law school from Texas Wesleyan to Texas A&M, Wright acquired some Texas Wesleyan Law banners that previously hung in the 1st floor entry hall and were used in graduation ceremonies. Across from his office on Main Street in Rosebud is the Fabric Barn, a regional magnet for quilters. Eureka! He decided to create a quilt with his beloved shorts and shirt and the banners.

He met with a quilter and explained that — by his reckoning — the banners were worth about $73 million (the cost of the A&M-Wesleyan deal), and the short and shirt combo was worth about $115,000 (the cost of his law school tuition). She later returned his things saying she was not comfortable cutting such sacred cloth.

Wright then turned to a Grand Master Quilter who could achieve his vision. She found additional legal cloth, images of the Texas Bar, the Missouri Bar, and the US Supreme Court. In total the quilt took nearly two years to complete and represented 1,000 of hours of studying. 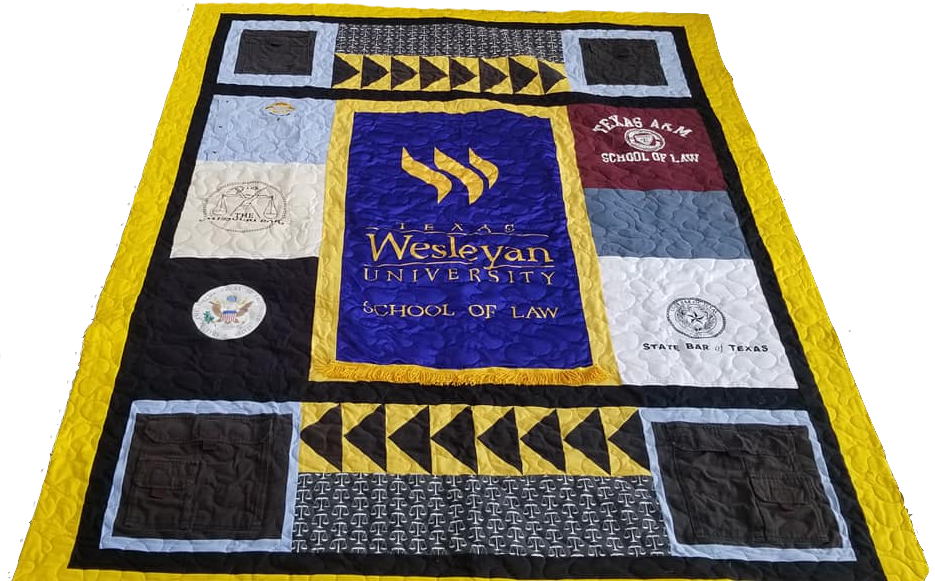 Wright explains there is significance and symbolism in the quilt beyond his lucky clothing:

Today, he proudly displays the quilt in his home.


Judge Matthew Wright is currently a member of the Diaz & Wright firm, working in federal and state litigation. Additionally, he serves as Presiding Judge for the Rosebud Court of Record and the City of Lott Municipal Court, teaches negotiations and conflict resolution at Baylor University’s Hankamer School of Business, and is a coach for the Texas A&M Law moot court program.