Mr. Skip Alvarado visited Texas A&M School of Law to speak with students and faculty members about his 50-year career in the oil and gas Industry. Since graduating from Texas A&M University in 1968 with a degree in Architectural Construction, Alvarado has led an exciting career distinguished by his leadership in extinguishing more than 700 oil and gas fires in Kuwait lit by retreating Iraqi forces during the first Gulf War. 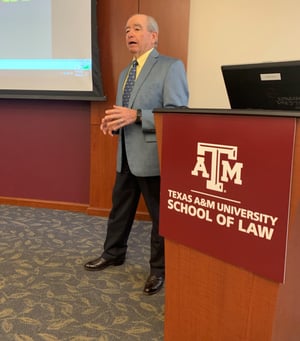 The lunchtime Q&A session also featured a video highlighting the massive logistical and organization challenges facing his company in this endeavor. Because of the number of wells on fire, industry experts predicted that it would take five years to extinguish them, but Alvarado and his team managed to extinguish the fires in just eight months. Afterwards, Alvarado helped lead efforts to rebuild Kuwait’s oil producing infrastructure.

Alvarado explained that millions of gallons of water, C-4 explosives and “snuffer tube” pipes were all used to extinguish flames only to have the fire reignite due to wind gusts and ultimately leaving the team with the dangerous task of “re-capping” the high-pressure oil well. Remarkably, there were no worker causalities during the five-year project.

Apart from the safety concerns, Alvarado reflected on the legal challenges his company, Bechtel, was faced with in completing the project, including negotiating contractual liability waiver stipulations and navigating the risks of doing business in unstable jurisdictions. He also expressed his gratitude for a close relationship with the general counsel of Bechtel at the time and emphasized how important it is for attorneys to understand the customary industry and business practices of their clients.

Alvarado suggested that students interested in working in oil and gas pursue in-house internships with an energy company or seek educational opportunities outside of law school to better understand the industry apart from the law. Students should also remember that energy is more than oil and gas, but rather increasingly includes water, solar and wind.

The multifaceted nature of the industry underscores the importance of students focusing on their own interest area and following that direction. Additionally, as Alvarado described in his life story, having a willingness to travel and the courage to step outside your comfort zone is also important for students interested in this career path.