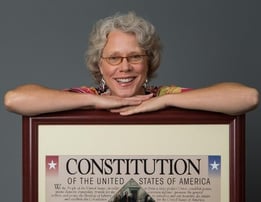 Texas A&M University School of Law Professor Meg Penrose visited the University of Iceland and served on a panel with a member of Parliament.  The panel discussed the excitement about Iceland’s pending constitution, which was drafted by a 25-person constitutional council composed of Icelandic citizens.

This conference follows Penrose's participation as one of several co-authors on the Icelandic Federalist Papers that encourages Iceland citizens (much like the U.S. Federalist Papers) to adopt the pending constitution.