Texas A&M University School of Law Professor Saurabh Vishnubhakat demonstrates the university's pledge to prepare its students for leadership through law. In this case, it's "do as I say and AS I do." Professor Vishnubhakat is the chair-elect for the executive board of the Association of American Law Schools (AALS) section on Intellectual Property. 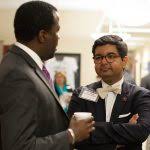 In addition, he is a part of the three-member IP Resource Committee for the Southeastern Association of Law Schools, runs the IP & IT Conferences website, coordinated a public comment by law professors in response to a Patent Office regulatory proposal earlier this year and testified before the Federal Trade Commission this fall.

When asked what drew him to law, Vishnubhakat says:

I have always been attracted to intersections between disciplines. My prior studies in chemistry combined traditional laboratory analysis with computer science to address biological challenges such as drug targeting and protein folding. Curiosity about patenting scientific discoveries led me to the even broader opportunity to combine scientific literacy with legal training. What keeps me engaged is that legal fields also intersect with each other in rich and often unexpected ways, just as scientific fields do.

At Texas A&M School of Law, we believe that the best education combines cutting-edge knowledge of the law with real-world skills. We have a diverse faculty that includes preeminent scholars, seasoned law and business professors, and professional experts. Our professors are pioneering authors, speakers, and financial advisors. They have worked at top law firms and important government agencies, and occupied top positions within the financial industry. That’s why our graduates are well-rounded and prepared to meet the challenges they will face in practice.