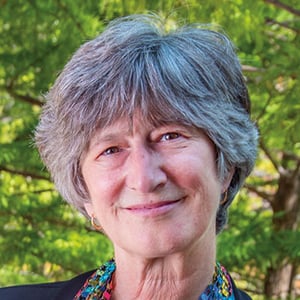 Professor Nancy Welsh is Texas A&M University School of Law's newest member of the American Law Institute (ALI). ALI is the leading independent organization in the United States producing scholarly work to clarify, modernize, and otherwise improve the law, according to its website. Welsh is among the 36 members newly elected by her peers to the ALI in October.

Professor Welsh is a leading scholar and teacher of dispute resolution and procedural law. She examines negotiation, mediation, arbitration, judicial settlement, and dispute resolution in U.S. and international contexts, focusing on self-determination, procedural justice, due process, and institutionalization dynamics. Professor Welsh has written more than 60 articles and chapters that have appeared in law reviews, professional publications and books, is co-author of the 4th, 5th and 6th editions of DISPUTE RESOLUTION AND LAWYERS, and is co-editor of the forthcoming book, EVOLUTION OF A FIELD: PERSONAL HISTORIES IN CONFLICT RESOLUTION. In 2006, she conducted research in the Netherlands as a Fulbright Scholar and taught at Tilburg University.

In 2016, she was named a Visiting Scholar of the Program on Negotiation at Harvard Law School and a Visiting Fellow of the Institute for Advanced Study at Indiana University Bloomington. In 2018, the Texas Bar Foundation selected her article, "Do You Believe in Magic?: Self-Determination and Procedural Justice Meet Inequality in Court-Connected Mediation," for its Outstanding Law Journal Article Award.  Her article, "The Thinning Vision of Self-Determination in Court-Connected Mediation: The Inevitable Price of Institutionalization?," was recognized as the third most-cited article of the Harvard Negotiation Law Review in its first 10 years of publication.  With Professor Joseph Stulberg, she succeeded Harvard Law Professor Frank Sander as Co-Chair of the Editorial Board of the Dispute Resolution Magazine.