The significant increase in the number of students at the Texas A&M University School of Law mandated several changes with the school’s parking.

“We recognized immediately that the increased enrollment was going to impact how we operate across the board,” said Assistant Dean Viviene Crooks. “Obviously, parking had to be enhanced rather substantially.”The School administration examined various options to expand parking. They approached adjacent organizations UT-Arlington and the Sheraton Hotel to look at swapping or dovetailing parking spaces. This included trading spaces with the Sheraton, which resulted in the new “Reveille” student parking lot. 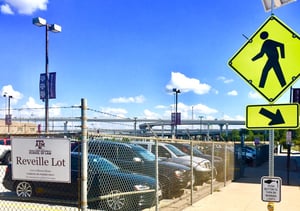 “When we received the new lot, it was apparent some renovation was necessary,” Assistant Dean Crooks said. “Part of that was repositioning and repainting the parking lines, and setting up specialized spaces.” That work was completed as the new academic year began.

The other lot swap with UT-Arlington was a creative owl-lark solution, as most of UT-Arlington’s classes are held after typical work hours. “Instead of both schools seeing various spaces lying empty at different parts of the day, the schools now share the same spaces, with UT-Arlington opening up spaces to Texas A&M Law during the day, and A&M turning over slots at night,” AD Crooks stated.

Lot security also has received priority. “Protection of our people and their property is paramount,” Assistant Dean Crooks said. Texas A&M School of Law has hired a new security team, Allied Universal Security Services, and they have been on the beat starting this past month, she said. The interim manager is Darryl Brooks, who is now on site.

“Not only are there security alert boxes in each lot, but each employee and student can also stop by the front desk and request an escort to the lot,” Assistant Dean Crooks added. 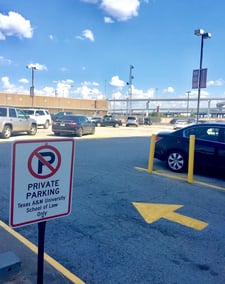 Finally, pedestrian safety has been aggressively addressed, with a squadron of signal lights and designated crosswalks and yield signs designed to slow traffic down between the School and the lots.

“Everyone should remain cautious crossing Calhoun Street, with his or her head on a swivel,” Assistant Dean Crooks said. “But now it’s better than dodging the Indy 500 car race that the road had become,” she said. The School’s ongoing close coordination with the City of Fort Worth is highlighted by these changes, she concluded.