Professor Michael Z. Green is elected to the National Academy of Arbitrators 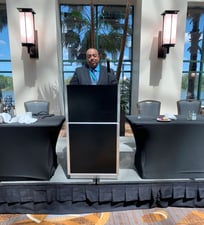 The National Academy of Arbitrators was founded in 1947 as a not-for-profit honorary and professional organization of arbitrators in the United States and Canada and has participated in appellate litigation as a friend of the court in both the United States and Canada in cases affecting the institution of arbitration.  The Academy also has worked cooperatively with government agencies, professional organizations, institutions and learned societies in the field of labor-management and employment relations.  Academy members hear and decide thousands of labor and employment arbitration cases each year in private industry, as well as the public and non-profit sectors.

In order to foster the highest standards of integrity and competence, the Academy has instituted rigorous membership requirements.  Generally, applicants must demonstrate their substantial and current experience as arbitrators of labor-management disputes.  Under “exceptional circumstances,” however, the Academy also may admit applicants with more limited experience in arbitration who “have attained general recognition through scholarly publication or other activities as an important authority on labor-management relations.”  The Academy values such scholars and authorities for their enrichment of the organization’s leadership, work and deliberations.  Historically, the most highly-acclaimed labor law scholars have been members and leaders of the Academy.

The Academy’s Board of Governors elected Michael for membership under this “exceptional” standard.  This is in recognition of his extensive and well-respected scholarship regarding labor-management, workplace and dispute resolution issues, as well as his leadership in organizations such as the AALS Labor Relations and Employment Law Section and the ABA Dispute Resolution and Labor and Employment Law Sections, his elected membership in the international Labor Law Group, the College of Labor and Employment Lawyers and the American Law Institute.  The Academy also recognized Michael’s service on the labor arbitration panels of the Dallas Area Rapid Transit Board, City of Houston Police, American Arbitration Association and Federal Mediation and Conciliation Service.

"I am so proud to call Michael my colleague.  Congratulations on this honor and recognition, Michael!" says Nancy Welsh, director of the Aggie Dispute Resolution program.