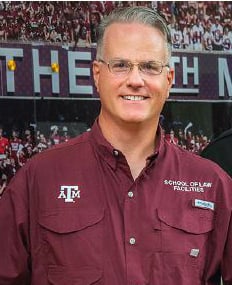 Tell us about you.

I have a bachelor’s degree from the University of North Texas in Geography/Earth Science and a minor in Spanish. I did a study-abroad and lived in Mexico for over a month while living with a family and attending school. I played saxophone in a Ska band in the late 90’s and played all over the Dallas/Fort Worth metroplex and Austin. My wife and I have known each other since high school band. She has been an elementary school teacher for 27 years. Our daughter is a junior at Texas Woman’s University, and our son is a percussion director for an area high school. We have two Bassett hounds, a Labrador mix and two cats.   We love taking our camper to different places and enjoying the scenery.

Why are you proud to work at Texas A&M Law?

The law school came from such humble beginnings with the hard work of so many people to become what it is today.

What makes TAMU Law unique and worth taking a second look or worth listing first on anyone’s list?

The professors are very approachable, and many have been here for a long time and are here to help students succeed. You could go anywhere else, but the recognition of the Aggie Ring and being a part of the Aggie Network is invaluable.

Do you have a fave Aggie core value?

Selfless Service. Though I believe that the Six Core Values are equally weighted, Selfless Service embodies the idea of reaching beyond your ego and helping others without gain. Something we need more of today.

What was your favorite tv show growing up?

I had many! Battlestar Galactica (late ‘70’s version), Buck Rogers in 25th Century, Dukes of Hazzard, The Love Boat, Fantasy Island, CHiPs, BJ and The Bear, Little House on the Prairie, Wonder Woman, Charlie’s Angels….just to name a few!

Is there a Texas A&M Law student who has left an impression on you?

Paul Youngblood. When I talked to him in the first week of his 1L year, I could tell he was questioning his decision; but over the three years, he became a confident student, who was poised to succeed. He has a very successful law practice.

What was your first job?

The neighbor kid behind me helped me secure my first job at 15 working for a local newspaper, inserting ads and stamping addresses on newspapers, bundling them and taking to the post office. One night, while working with what most people would have labeled “misfit teenagers”, the power was knocked out to half the building, the van door was torn off and thrown on top of the stack of newspapers and a spontaneous, punk-fueled, dance off resulted in a huge hole in the wall of the room we were working in at the time.

Needless to say, the guy that was “supervising” us (he had a real day job and was the brother-in-law of the editor) almost had a heart attack. The guys that I worked with were crazy, social outcasts that introduced me to Rush, Led Zeppelin and the art of jumping a van full of newspapers over railroad tracks. Though I did not take part in their antics and angst, I enjoyed every minute of being around them because they were so different from my circle of friends.

What trend deserves a comeback?

Parachute Pants. I always wanted them but was too awkward and chunky to sport them; but, the dream will live on in my head.

You may catch Matt almost 24/7 as the Facilities Manager.

He is known for making the law school a safe place for everyone and for consistently being encouraging and reliable. His devotion does not go unnoticed. In 2016, he was the recipient of Texas A&M University’s 2015-2016 President’s Meritorious Service Award (PMSA). We celebrate you, Matt!

Texas A&M School of Law continues to reset expectations, climbing to the 53rd ranked law school in the nation, according to U.S. News and World Report. "Our staff fuel the engine," says Dean Robert B. Ahdieh. Get the facts and learn more about the law school's journey.