Kevin Hernandez, editor-in-chief of the Texas A&M Journal of Property Law, considers his greatest accomplishment to date being offered an invitation to publish his article 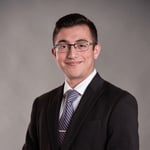 , The Implications of Environmental Law and Latino Property Rights on Modern-Age Border Security: Rejecting a Physical Border and Embracing a Virtual Wall, with the Harvard Latinx Law Review.

He thanks Professors Timothy Mulvaney, Aric Short, Luz Herrera and Fatma Marouf for the "tremendous" role they played in his formative years during law school. Hernandez attributes his intellectual curiosity, perspective and writing style to their guidance.

For many, the construction of a physical border is a rational solution to national security concerns at the southern border. However, there is much evidence indicating that the negative impacts of building a physical border wall far outweigh its benefits. Particularly, the border region’s eco-systems have much to lose in the form of extinctions, biodiversity reduction, and critical habitat destruction. On top of that, a number of Latino communities would be the victims of various eminent domain claims that would strip them of land that, in many cases, has been in their family for multiple generations. The broad, almost unilateral, scope of authority granted to the President to build a physical border wall would eviscerate decades of environmental protection and cost the United States billions of dollars to build and upkeep the wall.

This paper proceeds by explicating: (1) the statutory development of US border policy since 1996; (2) the impact that a wall would have on Latino land ownership along the U.S.–Mexico Border; (3) the economic and environmental impact of constructing a physical border; (4) the way in which the environmental impact may be used to prevent the construction of the wall; and (5) an alternative to a physical border that will promote national security and ensure the longevity of the border region’s ecosystems and economy.